How to produce window graphics

Here’s a common scenario – you need to produce some window graphics for an upcoming campaign. You have the design, which is fairly straightforward as creative ideas go, at least in the fact that it's a 2D and not a 3D production. You send an email to show us the proposal and ask for an estimate and some production advice. 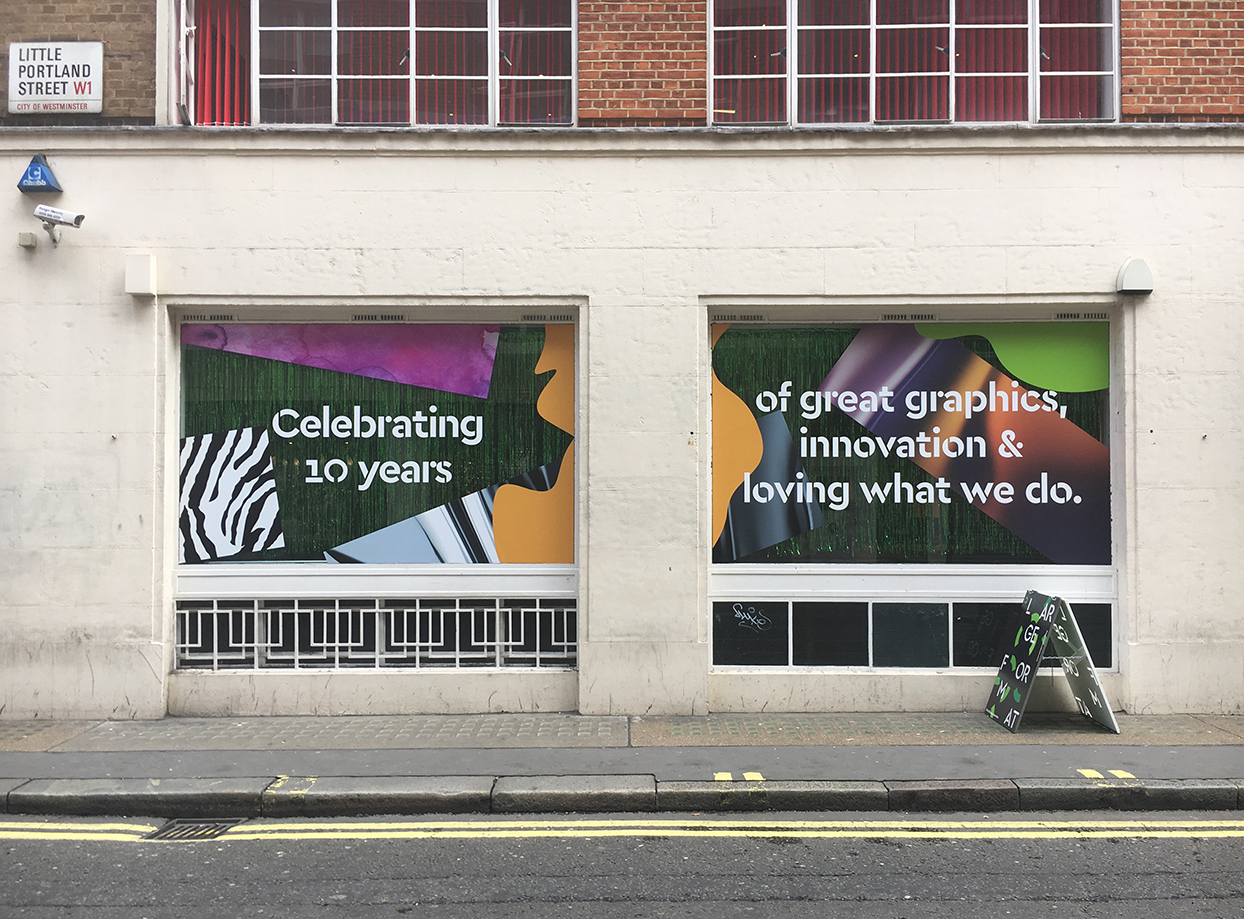 We all know the phrase, there are many ways to swing a bat, or even, trim the fat? In this piece, we’ll focus on the myriad ways to produce retail window graphics. Although, these same techniques could also be used on other surfaces like walls and internal glass partitioning, for example. So let’s look at the methods and some of the materials available.

Cut window vinyl decals
Window vinyl decals are everywhere. Practically every retail store uses them for window messaging, be it for pricing, advertising a sale or for campaign descriptors.

A decal is simply when letters and shapes are cut from pre-coloured adhesive vinyl. It's much like using sheets of coloured paper, except that it comes on a roll-up to 50m long and has a sticky reverse. The adhesive allows us to install the produced designs on glass or other surfaces.

Colours are selected beforehand from swatches and the design is produced on a plotter which follows the vector path, supplied to us in .ai or .eps format. We then remove the parts of the vinyl not needed, called weeding. Lastly, the design is applicated. This is when a sheet of film is applied to the vinyl, holding it in place for installation. Once stuck to the window surface, the application film is removed, and presto – you have a vinyl decal for all the world to see.

Using this method we can produce single coloured designs, or we can produce graphics, logos and messaging that employ multiple colours. Each colour is produced as an individual element and pieced together on site. Although vinyl decals give the brilliance of flat colour and allow us the option of golds, silvers, metallics, fluorescents and frosted, they can be complicated to install. For example, it's not necessarily the best way to produce a multi-coloured design, both in terms of time or cost. This is where the next two methods described below come in. 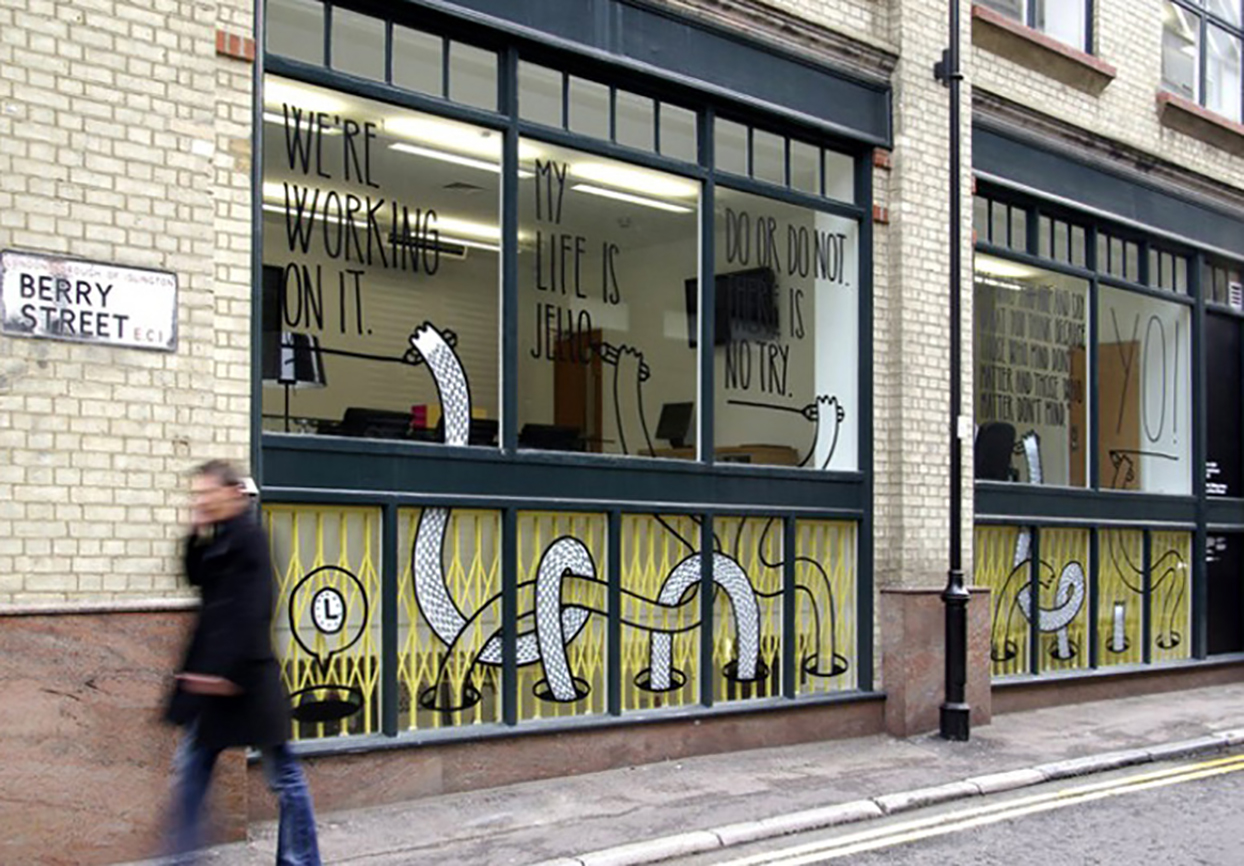 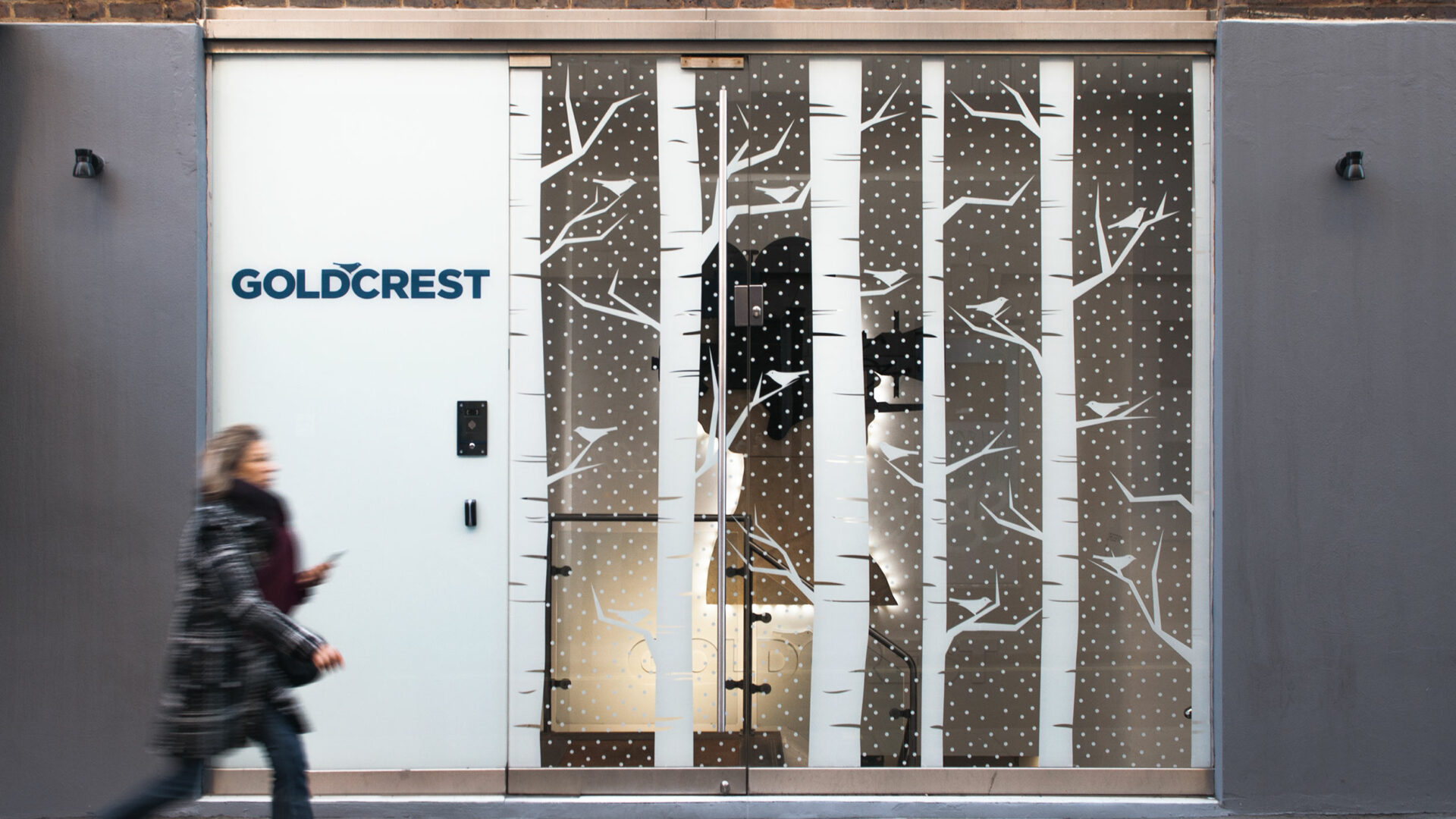 Print & Cut
In many ways, this is like using pre-coloured vinyl to produce a graphic. However, instead of producing a multi-coloured design in multiple individual colours, we instead print the design. This means we have one flat graphic in a single piece that can be cut to shape on the plotter following a cut path. This method means we don’t need to potentially spend a long time installing many pieces of vinyl to produce multi-coloured graphics. 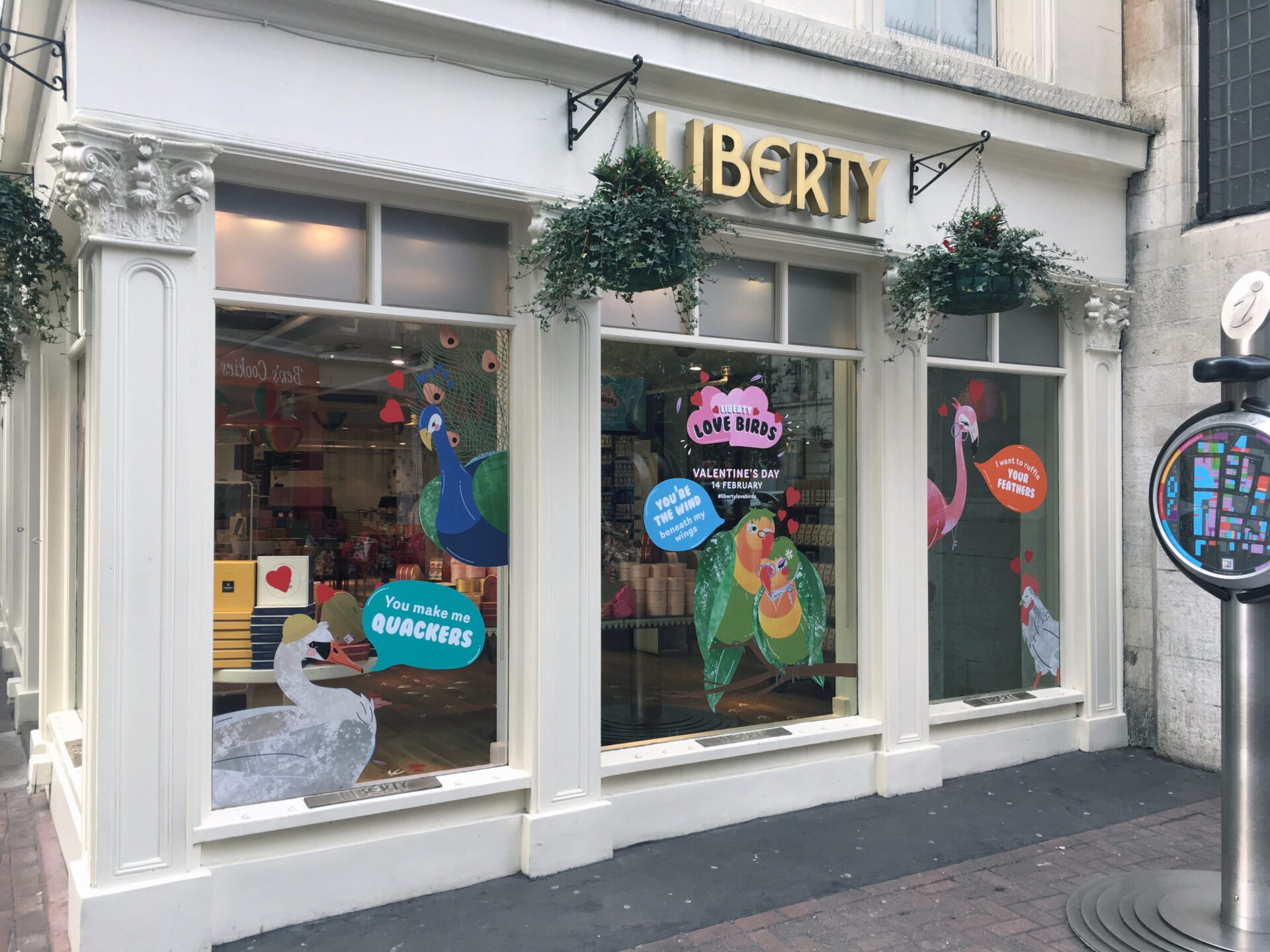 With Print & Cut, we can produce a fuller range of colours, with closer matches to Pantone and other colour references. (though it is a CMYK process) It also means we can print tones, graduations and complicated patterns. And whilst we cannot print the specials available in standard vinyl decals, such as metallic and fluorescents, in theory, if the design allows us to, we could place these in using cut vinyl or even print directly to these colours as our base material. 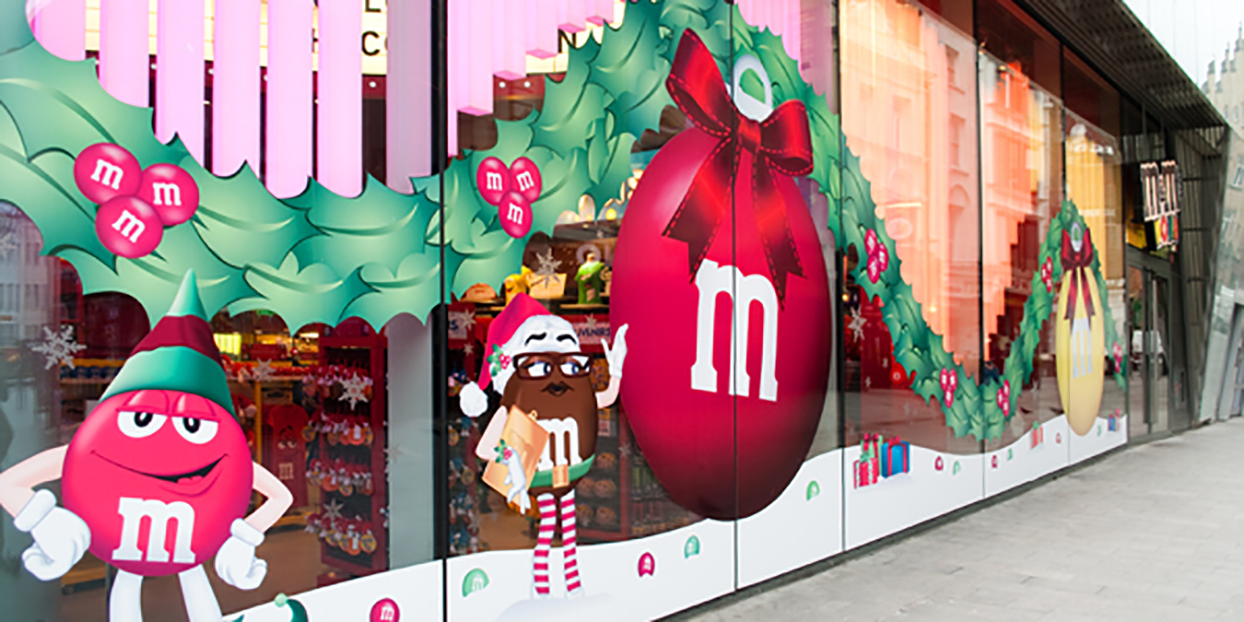 Straight Print
This is possibly the simplest production method. Instead of printing and cutting to shape, we can produce your design to a full piece of self-adhesive vinyl, solid or clear, that is applied to the window. This allows us to either block out the entire window or, if the design only covers a portion of the glass, we print using an optically clear film so you can see directly through it beyond the area of your creative. Printing a layer of white ink first gives us the ability to produce solid shapes onto a clear film. 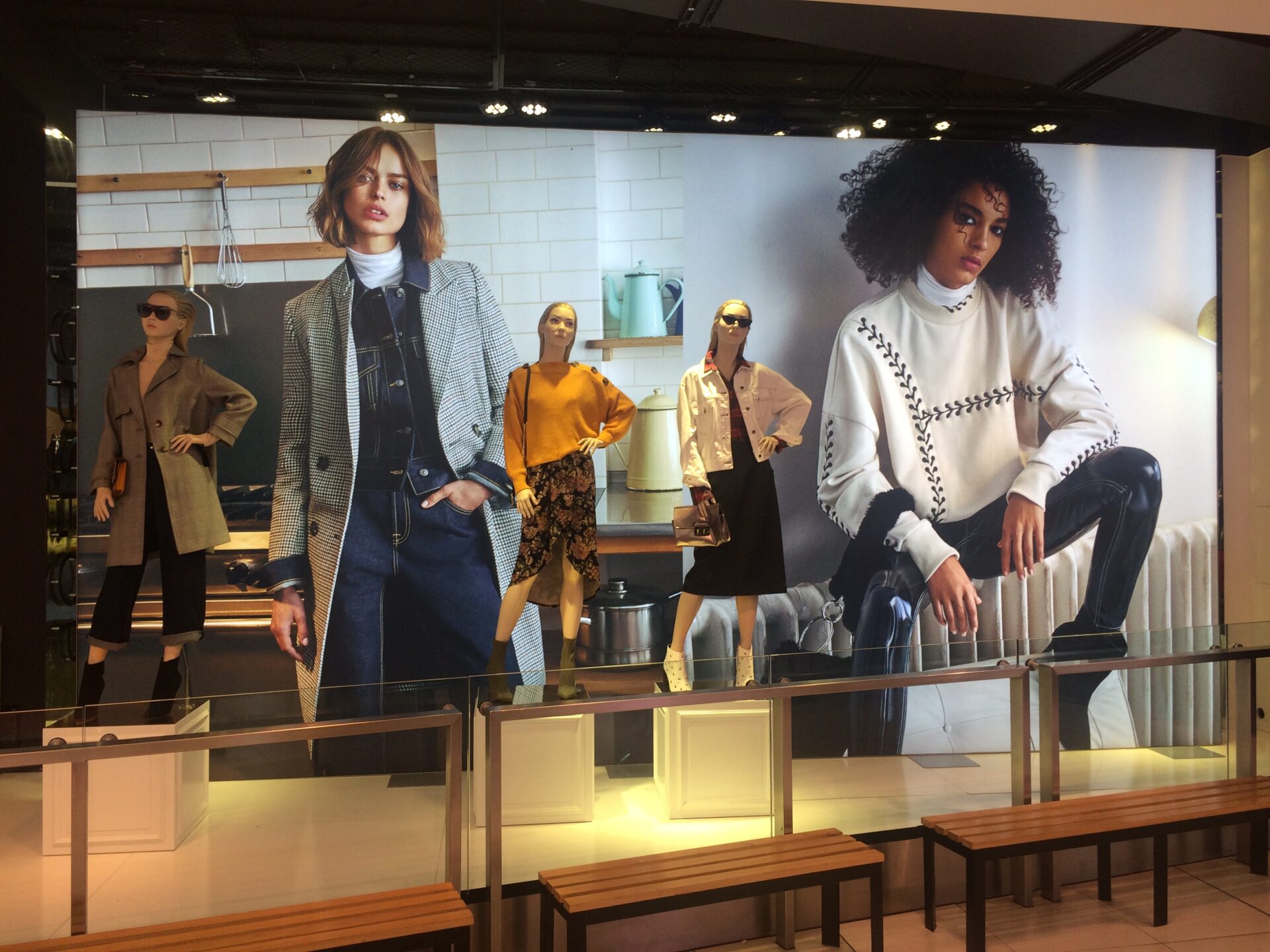 It’s also possible to use something called clear cling, which is easy to install, remove and reposition. This makes it a visual merchandising team’s dream material for small manageable graphics and messaging, which they can choose to install themselves if wanted.

As with Print & Cut, instead of using a white or clear self-adhesive vinyl, we can also print onto interesting alternative types of vinyl. These include golds, silvers, metallics, fluorescents and frosted vinyl. 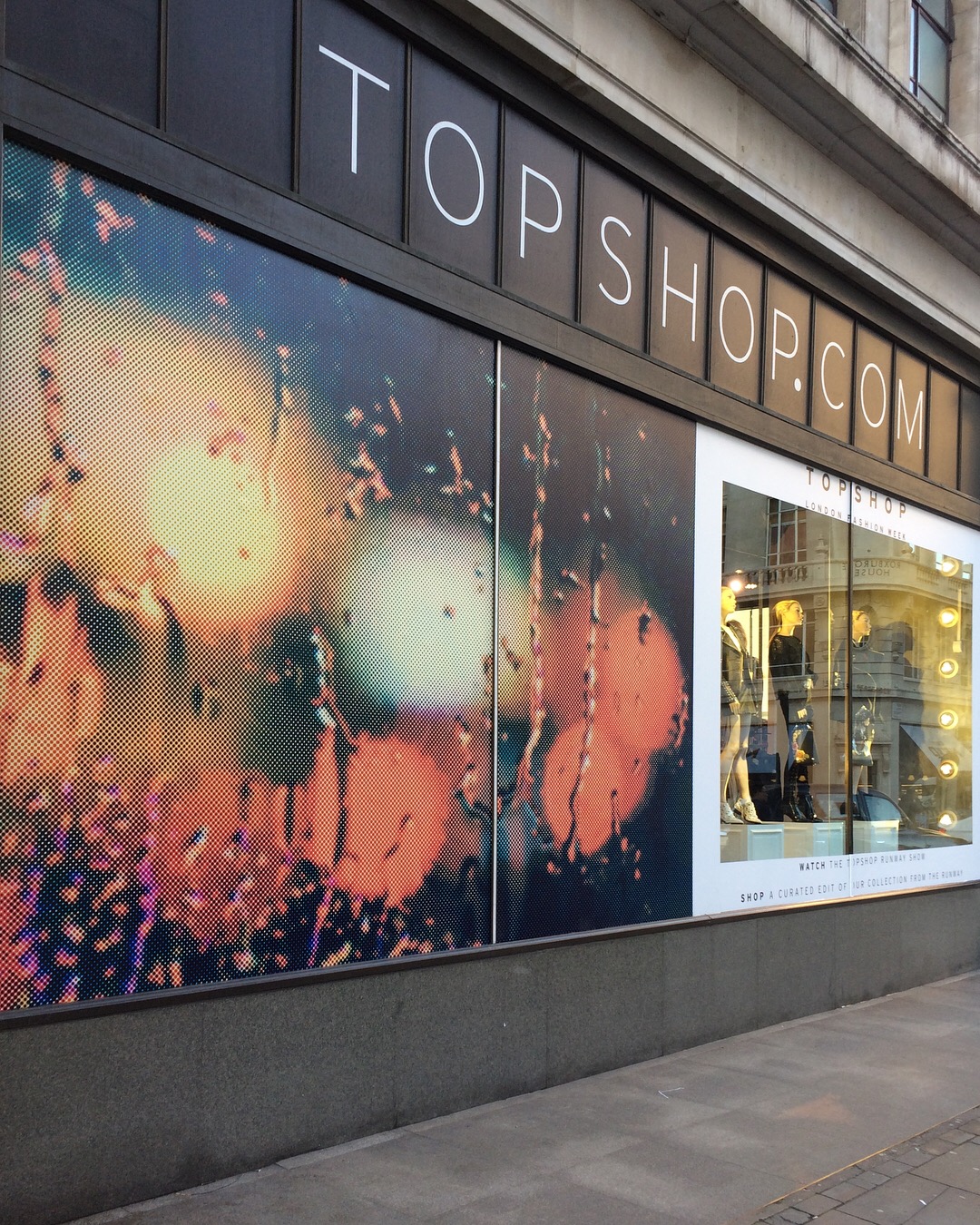 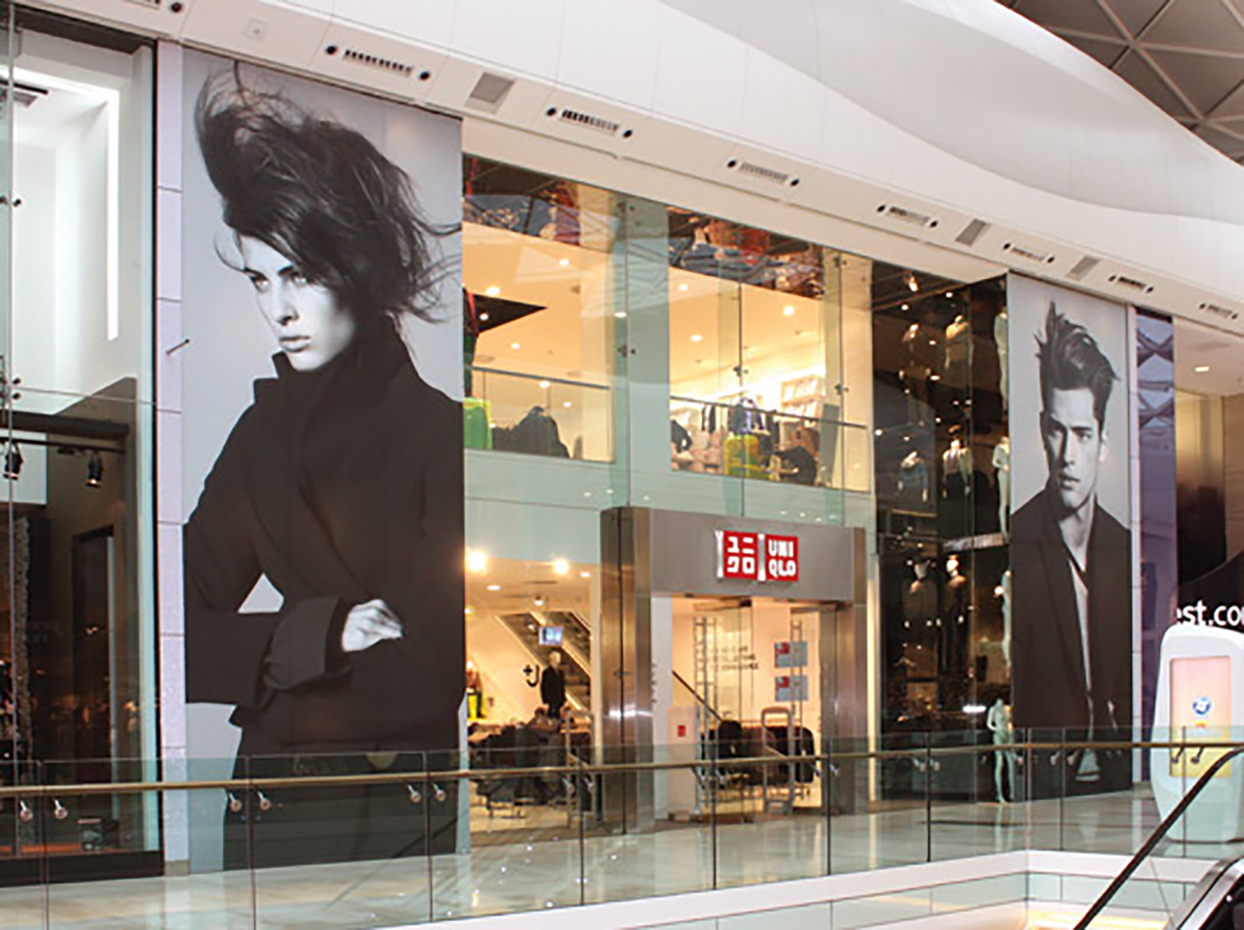 So that’s the standard production methods we use for window displays covered. If all the above is bamboozling, it need not be. There are potentially many of ways to produce a creative and we’re here to help choose the most appropriate for you. There are a few factors we’ll take into consideration – obviously, the design to be produced, but also where it’s going; how long it’s going to be up; if part of it needs to be changed over time (such as pricing); and of course, budget. So, let’s start with a conversation and see where we go. We are experts in large format print and display after all.